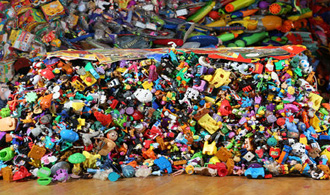 The former head of a Latino foster parents organization was sentenced Thursday to 60 days in jail, followed by 120 days of home confinement, for hoarding more than 12,000 donated toys meant for needy children.

Virginia Prieto Kelly, 75, had faced a maximum of five years in prison, but San Diego County Superior Court Judge Louis Hanoian opted for a low-end term that will be followed by three years of probation.

Deputy District Attorney Chris Ryan argued unsuccessfully for a 16-month prison sentence for Kelly, who was convicted July 9 of grand theft for keeping $375,000 worth of toys.

Ryan said Kelly deserved a stiff term because she did not show any remorse or apologize for her actions.

According to the prosecutor, the defendant’s criminal actions will have an impact on people who want to donate toys to charitable organizations.

“I think that we have yet to know the full ramifications of this case,” Ryan told reporters. “My concern is that it will hurt the gift-giving community this year, and I do feel that for every toy that she kept, that she had stored away, she did take Christmas from a child in San Diego County.”

Kelly took toys and clothing from Toys For Tots, the Child Abuse Prevention Foundation and the Polinsky Children’s Center, and stashed the items in two locked bedrooms in her San Ysidro home, her daughter’s garage and a storage facility in Chula Vista, the prosecutor said.

Maj. Donald Prograis of the Marine Corps’ Toys for Toys program said Kelly’s actions — her failure to get toys to needy children — were unacceptable.

Kelly “stole not just toys, she stole Christmas,” he said.

Susan Golding, head of a group called Promises to Kids, sent a letter to the court saying the defendant’s actions could have a “chilling” effect on future donors.

“I have no idea how a person could steal from abused children,” Golding wrote.

Defense attorney Thomas Matthews maintained that authorities were out to get his client from the beginning, and that Kelly had dedicated her life to helping foster families.

He said the case started out as an investigation into someone selling toys, which proved to be unfounded.

Matthews said Kelly had hoped to avoid any time in jail.

“Her intentions, as she’s indicated all along, were always sincere,” Matthews told reporters. “Her attitude was always to benefit the foster children under her association. In her mind, that was always her intention. She is having a difficult time believing that she actually did something that was criminal.”

The attorney said Kelly’s behavior was not “sinister” and inconsistent with the way she had lived her life. He said his client was a “go, go, go” type of person who was slowing down at age 75.

The judge set bail at $250,000 and told the defendant that she should report to jail Oct. 14 unless the bail is posted.

Ryan said a probe was launched after a foster mother came forward just before Christmas 2008 to complain that she couldn’t get any donated toys from Kelly.

The next month, investigators from the District Attorney’s Office went to the defendant’s home, and she told them all of her toys had been given away, Ryan said.

One investigator left Kelly’s residence but another stayed behind and watched as the defendant and others loaded bags into the trunk of Kelly’s car. Investigators obtained search warrants and found thousands of new toys, backpacks and Halloween costumes in several areas, the prosecutor said.

Hanoian said Kelly — even though she was not the giver of the donated toys — took credit from the community for doing so.

“What she did was take the credit for the generosity of others,” the judge said.