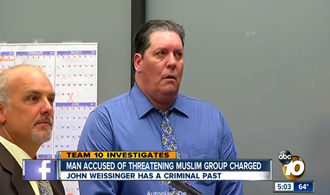 SAN DIEGO – A man accused of leaving a threatening voice message at the San Diego office of the Council on American-Islamic Relations and sending a threatening email to the organization’s office in Washington, D.C. pleaded not guilty today to seven charges with hate crime allegations.

John David Weissinger, 53, faces about five to six years in prison if convicted. He was allowed to remain free on his already posted $50,000 bail.

Deputy District Attorney Oscar Garcia said a female employee came to work at CAIR’s Kearny Mesa office the morning of Jan. 15 and heard the threatening voicemail.
Weissinger allegedly used derogatory and inflammatory language in the message, saying he had a lot of firepower, referencing the massacre at the Charlie Hebdo office in Paris and how it could occur again, Garcia told Judge David Szumowski.

The defendant is also accused of sending a threatening email on Jan. 15 to CAIR’s office in Washington, D.C., the prosecutor said.

Once the communications were traced back to Weissinger, police searched his home and found an AR-15 rifle and a high-capacity magazine, Garcia said.

“I think the clear message from this is that some people think they’re protected by the First Amendment — that it’s absolute — that they can say anything they want, under any circumstances,” Garcia said outside court.
“I think what this case will make clear is that there are always prohibitions and limits on what somebody can say,” the prosecutor said. “The First Amendment was never meant to be absolute. Like you can’t yell fire in a crowded theater.”

Defense attorney Thomas Matthews said Weissinger had been drinking the day he allegedly made the threats but had no specific target in mind.

“I know my client certainly wishes he could take that day back,” Matthews said. “He doesn’t have any history of anything like this in his past.”

Hanif Mohebi, executive director for the local chapter of the Council on American-Islamic Relations was not taking the charges lightly.

The attorney said the firearm which was found in Weissinger’s home was not loaded and belonged to his brother, who recently died.

Mohebi said he considers Weissinger a terrorist and believes there is a double standard.

A readiness conference was scheduled for March 17 and a preliminary hearing for April 7.
Copyright 2015 Scripps Media, Inc. City News Service contributed to this report. All rights reserved. This material may not be published, broadcast, rewritten or redistributed.  http://www.10news.com/news/man-accused-of-threatening-muslim-group-pleads-not-guilty.