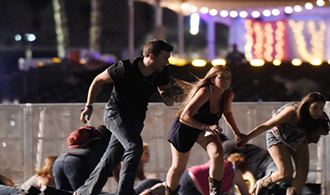 Any Criminal Defense Attorney would agree to the fact that the incident in Las Vegas is much more than simply about the issue of gun control. It is a wakeup call for the society to deeply examine the underlying reasons and human environmental factors that are causing such rebellion and psychotic behavior being exhibited by these mass murderers.

So far, there have been 270 different incidents this year and the number still counts.

Looking at such a large number of incidents happening nearly every day one might think of the possible reasons behind it.

As Lankford puts it:

“Firearm is a significant predictor of these incidents.”

There has been the belief that the ones who have some kind of mental impairment could only commit such a crime; however, the research conducted by the PLOS One suggests contagion in these attacks.

This is not it. This contagion is being wildly fueled by the US arms culture. It is said that for the population of about 319 million Americans, there are approximately 310 million guns which makes it roughly one arm per individual.

In 2013, these guns were nearly off the charts but then the legislation was disapproved at the Senate despite the widespread public support it received.

The advocates and Criminal Defense Attorney who were in for the gun-control again resurfaced in 2015, but then again the repercussions of two-decade-long crises called for the strict rules to be inadequate.

Little doubt prevails that there is an absolute need for some workable form of gun control–not an outright ban—but rather a system that limits the number and speed that rounds can be fired, a limit on the number of firearms an individual can own, a strict gun ownership registry, and a program that will get as many existing semi-automatic firearms off the street as quickly as possible.

According to Lois Beckett of the Guardian:

“The best approach is to zero in on that small number of high-risk people who are using guns to harm themselves or others.”

There needs to be at least a basic mental competency exam or similar testing, in addition to a thorough background check, prior to acquiring a firearm. Unfortunately, we live in a society where we all suffer for the actions of a few. Simply ask anyone who is old enough to have gone through the airport before and after 9/11. All of this will leave the Second Amendment intact and will go a long way at preventing another horrible event like the one at Mandalay Bay.

There are perpetrators who are directly involved in such heinous crimes. However, there are many innocent individuals who are jailed for the crimes they are not involved in. In these perilous times, a Criminal Defense Attorney can be of great help. At Liberty Lawyers, San Diego Defense Attorneys are present to help you out. With the experience of dealing in 100s of such cases and beyond, there is a surety of getting your loved ones the bail they deserve.